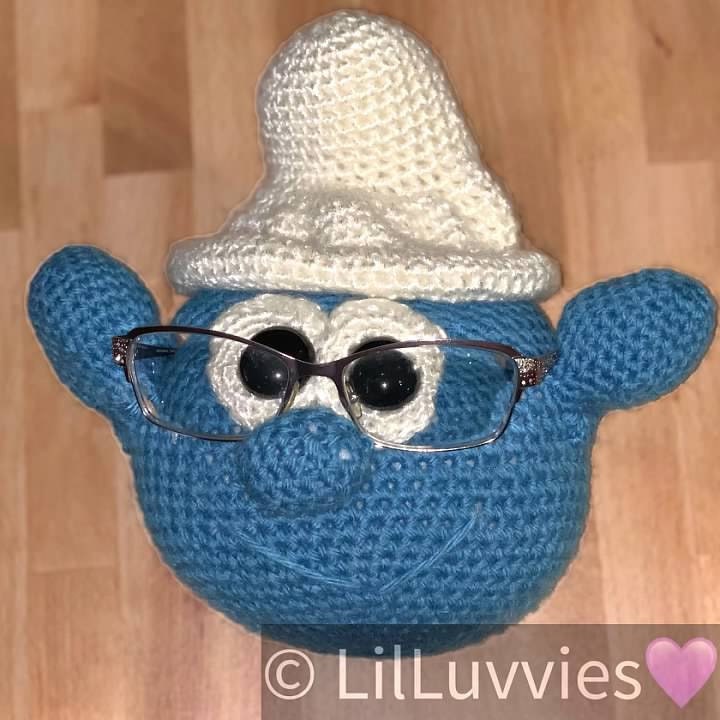 I don't deal well with failure. I think we've talked about that before. I am a perfectionist at heart. I don't like to do something if I can't give it my all and be the best I can be at it. And yes, over the two years I've been making amigurumi I've had ups and downs, for the most part my kids have turned out looking like they should.

After having spent most of December and a good part of January making baby Yoda Luvvies, I wanted to try something a little different. In hindsight, perhaps I should have just made a pattern that I had found success with in the past. But, I wanted something new. I had a pattern for a Smurf eyeglasses holder. The theory seemed straightforward: A big circle, a couple add ons, and a hat. I've made more complicated items in the past...I've even made Smurfette before. I was sure that this wasn't going to be a problem. That may have been the first sign of impending problems: I went into things far too confident for my own good.

Using some new yarn that I just got, I started working. By the time I finished the hat, I had a feeling there was going to be a problem. Even though I had used the right hook size and even relaxed my tension (I'm usually a very tight crocheter) the hate was not slouchy enough: I just wasn't able to make it fit the way it did in the pattern pictures. The more I tugged and shaped and played with it, the more frustrated I got.

This was supposed to be something quick and easy - a reaffirmation that I could do new things and succeed the first time out. How had this turned so very wrong?

After spending most of the day Sunday working on my "quick and easy" project, I was nearly in tears. I was so upset with how my final version turned out that I was ready to throw all my yarn out and never pick up my crochet hook again. Dramatic? Yes. However, I think we've established that I don't deal well with failure and am prone to making rash decisions.

Calming down some what, I still dutifully documented the project.

One of the things that I have always wanted to do is to provide insight into my crochet journey. Of course I have a business aspect to showing my work and talking about it; but, I also hope to have an educational and emotional connection with people, too. So, it is about the journey and not just the final project. Even though I very easily could have pretended this supposed Smurf never existed, that wouldn't be authentic and wouldn't show my online friends a true representation of the journey.

That's not to say that behind the scenes I didn't have a minor meltdown over the way this turned out. No, there was a pretty spectacular meltdown that included my little blue friend being introduced to the garbage can.

But, at the end of the day, I had to sit down and consciously make a decision: How was I going to react going forward?

Was I really going to say goodbye to my multitudes of yarn babies? (And possibly have my husband kill me for wasting all that money lol).

Should I take a break from crochet, which knowing me, if I did on the heels of a bad project could mean never picking up a hook again?

How was I going to deal with my disappointment over how this one project turned out?

At the end of the day, I decided that I was going to dust myself off and pick up my hook and start working on a new project. I probably didn't make the best decision to try a new pattern - even though it was from a designer I am familiar with. If that wouldn't have turned out well, I could have definitely been courting disaster. But, the next project turned out as advertised; and, now I have some - not all, but some - of my confidence back and I'm moving forward with other planned projects.

I'm sure that this will not be my only ill-fated project. I'm sure there will be others that won't turn out as expected. I just have to keep reminding myself that even in failure I have been able to practice my craft and gain experience and learn what not to do. Sometimes that's a hard pill to swallow...especially from someone who expects things to be perfect. But, it is somethingt hat I am trying to teach myself and to be ablet to grow from. And I guess that really is where the true journey lies.